3,660 words and counting!  I have kind of, by this point, given up on the goal of completing this novel in 30 days.  I suppose part of me always knew I wouldn’t reach it.  But you know what?  I’m OK with that.  My goal for years has been to write a novel, and I am accomplishing that dream right now.  So what if it’s not done in 30 days?  No one’s saying it has to be (other than the good folks at NaNoWriMo, that is!!).  And I’d rather have a good work than a rushed one.  With that being said, here is the latest excerpt from my novel, a scene which takes place after the candidate finds out just what his campaign manager has been up to all along.

The candidate and his campaign manager met in Locke’s study at his residence in upstate New York.  It was snowing outside; the flakes painting a white blanket across the barren landscape of his country farm.
Locke looked out the window with his back towards his campaign manager, the sunlight brightly shining on his front.
“Do you think we’ve gone too far, Harley?” asked Locke as he turned around and sat down.
“Of course not,” replied Lanser.  “We’ve only done what’s necessary to keep you in the race.  You know that just as well as I do.”
“Did we really need to do this?  I mean, the more I think about it, the more it weighs on my mind…  It’s just not sitting well with me,” said Locke with an obvious air of unease.
“I understand that you’re uncomfortable with this, but what did you want me to do?  Did you want me to just sit on the sidelines while you were being attacked?  You hired me to get the job done, and that’s exactly what I’m doing,” said Lanser defensively.
“You don’t get it!” exclaimed Locke as he began getting out of his seat to stand up and face Lanser.  “There’s a line!  This is not what we do!”
Locke’s crescendo-ing voice left an impression in the room, and perhaps even on Lanser.
In defeat, Locke finished, “This is what we said¸ this is what we told people, we would never do…”
Locke sat down in his brown leather executive chair with a deep sigh as he placed his elbows on the table, his head in his hands, and his trust in his gut.  He rubbed his temples out of exasperation and uncertainty.
“Lanser, you’re dismissed,” said Locke as he paused and looked up from his current position at his lifelong friend and adviser, a mere shell of the man and person he used to be.  “Permanently.”

Ten minutes until the stroke of midnight on Day 2, I was struck with inspiration about “first times.”  (Get your mind out of the gutter right this minute!!)  As such, rather than going to bed because I knew this challenge wasn’t going to complete itself, I sat down on the floor of my kitchen with my Mini (because my computer was charging in the dining room and I just hate interrupting charges) and set to work.

Even though it’s around 10-15 minutes into Day 3, I will go ahead and put the total at the end of Day 2 at 2,320 words!  It’s not nearly where I should have been by the end of today, but considering I am going to school full-time and working part-time (and being a social media and tech addict FULL-time), I don’t think that’s too bad.  😉

To another day of writing!!
Luke

In addition to my parents, I am thankful to have such a (mostly) awesome family, immediate and extended!  My aunts and uncles and cousins are pretty damn great, if I may say so myself.  I am particularly grateful for Josh (my brother) and Sheri (his girlfriend) and their daughter, Zoe.  It is such a joy and eye-opener to get to know this “lovely little lady” and see the world through her eyes and to be able to spend more time with her parents.  I’m starting to tear up-ish as I write this!  #DailyThanks

NaNoWriMo Word Count, Day 2:  0 change  😦
However, I did show a coworker my story so far today, and he really liked it and is looking forward to seeing more.  As soon as I get some work done on my speech and get through the rest of this week, I will go back to writing that “literary masterpiece!”  🙂 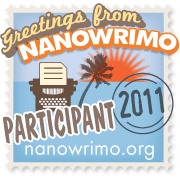 DAY 1: I have officially met my word count goal for the day, with 1,690 words, beating the NaNoWriMo goal by just 23 words.  I feel fairly accomplished, although I feel I don’t have a very good outline or idea of where I want my story to go.  However, I guess that can come later; write now, it’s all about the writing!  Yay for accomplishing goals!!
Excerpt:

10:20 a.m. | Locke for President Headquarters, New York, NY
“Mr. Lanser?  You have a Mr. Seymour who’s here to see you.” Harley Lanser’s secretary phoned into his office.
Harley Lanser made a deep sigh, cleared a few papers off his desk, gulped down the few remaining swallows of bourbon in his Tiffany tumbler, and initiated the speaker.
“Send him in.”
A few seconds later, a bookish-looking man in his thirties, attired in a dress shirt and tasteful argyle sweater vest, armed with a brown leather briefcase with a tan trench coat on his arm, walked into the vast office of the Locke for President campaign manager’s office.
Seymour made a few steps forward, shifted his coat and briefcase to his left hand, and extended his other to Lanser with a genuine smile on his face.  When Lanser didn’t stand up and reciprocate, Seymour’s face turned slightly sour as he took a seat in front of Lanser’s desk.
“What’s it gonna take?”  Harley broke the awkward-for-Seymour silence.
“Excuse me, sir?  I’m not sure I follow,” said Seymour.
“Bill, let’s not mince words here,” Harley said briskly.  “The candidate” – as Harley tended to speak of Locke when trying to distance him or speak of him in non-personal tones – “is willing to make some, ah, concessions, to keep this story of yours under wraps.  Both the candidate and I, and I’m sure you do as well, understand the consequences this could have for the campaign.  As such…”
“Mr. Lanser, with all due respect,” Seymour interrupted, “this story is going to go to press with or without Mr. Locke’s consent.  Legal has looked over this story a dozen times, all of the sources have check out, and to be frank, I’m here purely as a courtesy to you.”

I look forward to this challenge, which I know will be a real challenge with school and work – as well as photo processing! – thrown in the mix.

I haven’t decided yet whether I will stick with my first story idea… Now I’m thinking something more along the lines of international business mixed with a little espionage.

– Posted using BlogPress from my iPad

… and I am planning to participate!

According to its 2011 press release, “November is National Novel Writing Month, or NaNoWriMo, the world’s largest writing challenge and nonprofit literary crusade. Participants pledge to write 50,000 words in a month, starting from scratch and reaching ‘The End’ by November 30. There are no judges, no prizes, and entries are deleted from the server before anyone even reads them… Although the event emphasizes creativity and adventure over creating a literary masterpiece, more than 90 novels begun during NaNoWriMo have since been published, including ]Water for Elephants’ by Sara Gruen, and ‘The Night Circus’ by Erin Morgenstern, both #1 New York Times Best Sellers.”

I have always loved writing, and in my later years of middle school, was known for creating several short stories.  I’ve always wanted to write a novel, and I think this project and challenge is the best motivation for me to get started.

One concept I had for a potential novel came to me Friday evening while watching “Twelve Angry Men,” a show put on by our local Depot Theater Company (which, by the way, was FANTASTIC), a dinner theater show at the historic train-depot-turned-theater in my hometown and current place of residence of Dodge City, Kansas.

My idea?  What would happen if a man was put on trial, accused of murder, and the real murderer was selected as a member of the jury?  What lengths would that jury member go to to make sure that the accused was put away?  Would the existing justice system fail, or would the truth come out?

I look forward to working on this idea and seeing how it goes or if I’m able to do it.  I know I will be busy with school and work, but I know that it’s something I’ve been wanting to do, and I think I can do it!

I look forward to keeping everyone updated!

The World According to Luke

The World According to Luke

My Tweets
Fear Not Traveling

Hank and Kathy Will Get There When They Get There
ræða

A Word with Talia

Beyond the Iron Gate

The Thing About Today

As Told By Brittany

This WordPress.com site is the bee's knees

The World According To Josh
mayasingredients

For the Love of Wanderlust

Instilling a sense of wanderlust

Unearthing stories on the prairie

The Diary of a Retiree

For the love of travel

Photographs from my world.

The Art and Craft of Blogging

Rachel's adventures around the world

A labyrinth of art, fashion, movies and all my other obsessions